Stay up to date with all of the latest news with SZapp!

Please find some important information in this weeks newsletter

Attached to this newsletter is a detailed breakdown of the 2022 School Fees.  This information will help you budget for next year moving forward.  It is important for you to complete the Sibling Fee Discount sheet as this is needed to apply any discounts that are applicable to your family.

The school is intending to roll out more functionality to the Compass Portal.  This portal is intended to be a 'one-stop-shop' for parents in regards to communication.  Currently parents can access their child's report on this platform.  More information will follow next week about the increased access to the platforms full functionality.

An email was sent out yesterday concerning students who are ill.  If you have not read this, could you please do so at your earliest convenience.

Our Kinder Orientation is scheduled for next week.  Communication has gone out to parents today informing them of our Covid Safe event.  Unfortunately this means it will not follow our usual process, but I am sure the children who can attend will still have a very enjoyable experience.

It is with great pleasure that I can announce that Mrs Laura Matchett will be our REC from 2022 onward.

God bless everyone and stay safe.

Remembrance Day marks the anniversary of the resolution (end) of the First World War (the Armistice) on 11 November, 1918. 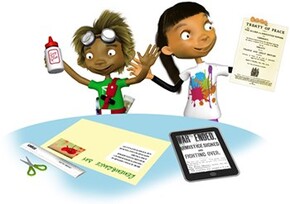 In 1918, after suffering a number of defeats and heavy losses, the German forces agreed to an armistice (a truce) with the Allied troops and this signalled the end of WWI. The treaty was signed at 5am on 11 November 1918, but did not officially come into effect until six hours later at 11am. The armistice was met by celebration around the world; people yelled, cheered and danced in the streets.

For this reason, Remembrance Day was originally called Armistice Day. In Australia, it was renamed in 1997. The name change broadened the meaning of the day, widening the focus from World War I, to a day which commemorates those who served in any war or conflict.

A minute of silence

Every year, nations around the globe fall silent for one minute at 11am on the 11th day of the 11th month to remember those who have served their country during war.

This practice stems from King George V’s declaration on 6 November 1919 that people throughout the Commonwealth should suspend their normal activities so that in “perfect stillness the thoughts of everyone may be concentrated on reverent remembrance of the Glorious Dead”.

Today at 11.00am we held one minutes silence, followed by some special prayer for all those who served their country.

The Flanders poppy was one of the first plants to grow on the blood-soaked battlefields of France and Belgium. In nineteenth century, English poetry, poppies often symbolised sleep or oblivion. After WWI, silk poppies were sold on Armistice Day with proceeds going to a charity for French children and to the Returned Soldiers League (RSL).

A sprig of rosemary

Many people wear a sprig of rosemary on Remembrance Day and on ANZAC Day. Since ancient times this aromatic herb has been recognised as a sign of remembrance and loyalty. For Australians, rosemary is even more significant as this plant grows wild on the Gallipoli peninsula, serving as another reminder of the ANZAC troops who lost their lives there.

In 2015, I was fortunate to be at Turkey's Gallipoli Peninsula and be a part of the Dawn Service. It was an amazing experience as I travelled with a number Army Veterans and Secondary Students. We then hiked up to Lone Pine for the next service. What struck me the strong smell of the rosemary that was truly everywhere.

A flag at half-mast

On Remembrance Day, flags are flown at half-mast from 10.30am to 11.03am as a sign of mourning and respect. It is said that this tradition stems from sailing ships that lowered their sails at sea to honour an important person or mark a death.

The Unknown Soldier is intended to represent all people killed during war, especially those with no known resting place. The original Unknown Soldier was entombed at Westminster Abbey in London on Remembrance Day 1920. On the same day, France entombed an Unknown Soldier below the Arc de Triomphe.

It was not until Remembrance Day 1993 that Australia laid to rest an Unknown Soldier in the Hall of Memory at the Australian War Memorial in Canberra. At his side was a bayonet and a golden sprig of wattle. The soldier was buried in a coffin made from Tasmanian Blackwood which was scattered with soil from the French battlefield, Pozières. 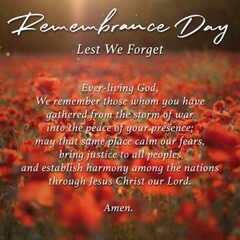 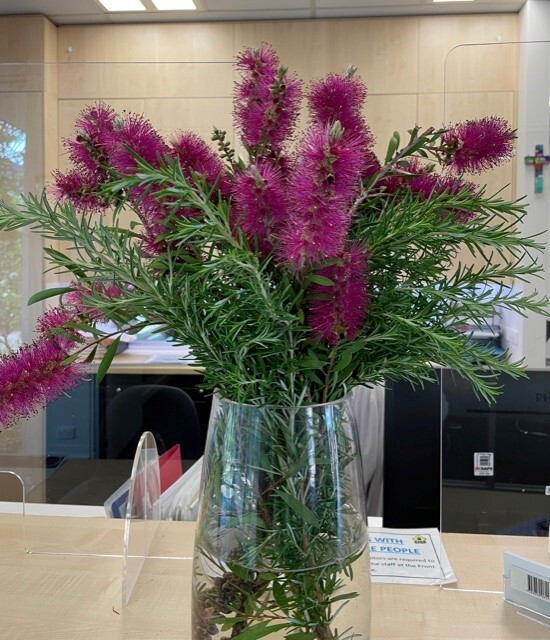 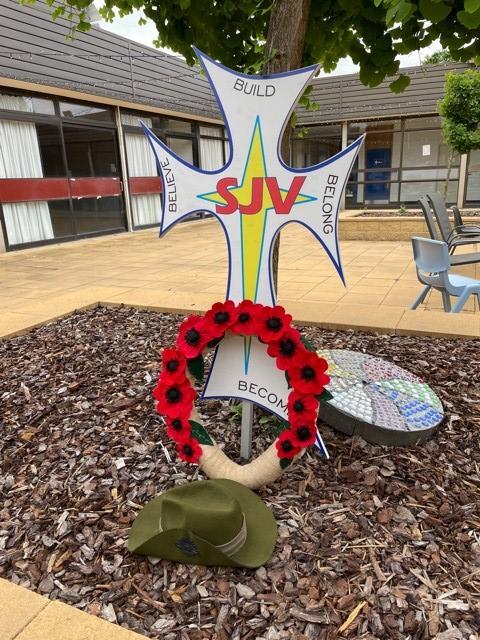 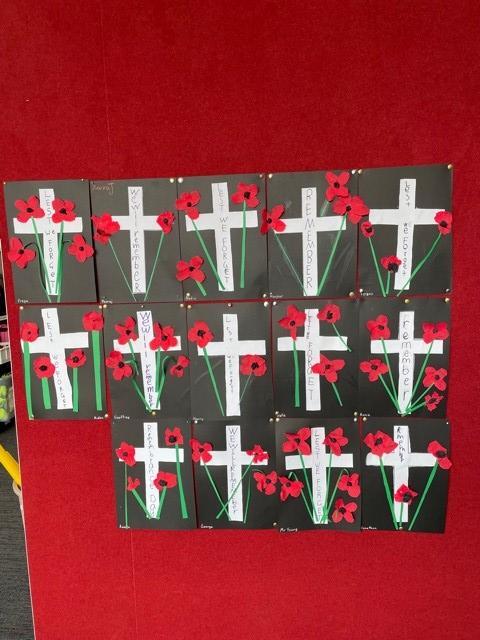 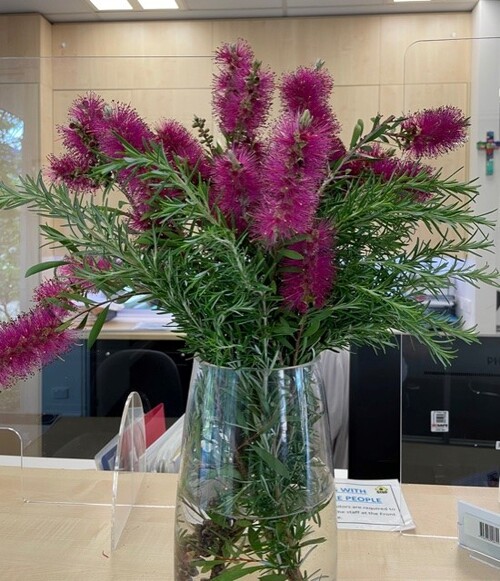 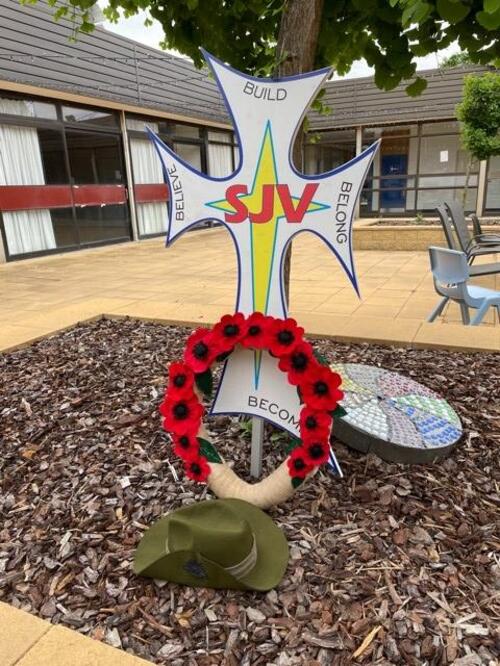 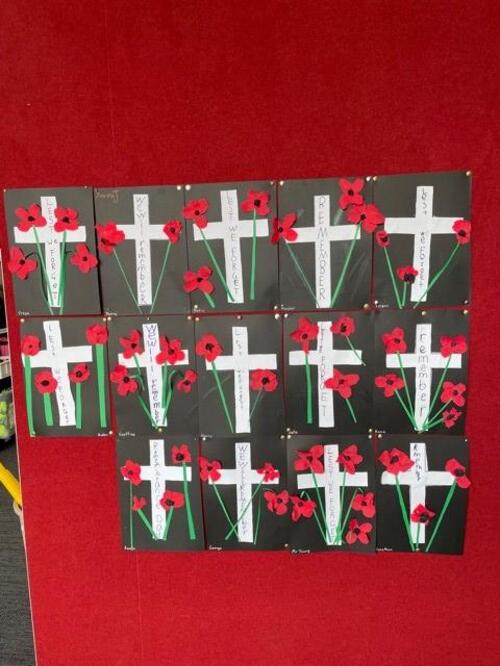 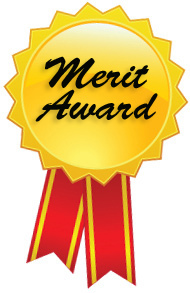 A big congratulations to the following students:

Please note - Merit Awards will be handed out at NEXT Friday's morning assembly.

Read More
This weeks focus for our SJV students is
Always try your best and focus on your work
For further information on our SWPB program visit our
Positive Behaviour webpage.

In class, Year 3/4CA have been learning about Similes and Metaphors

Ears as sharp as knives

By Dimitri and Jasmine

Stalking through the misty woods

Digging underground to make a burrow

Sly and sneaky at the dusk of night

By Sabina, Armahli  and Grace

Eyes piercing through the darkness,

Three, two, one, it sprints quickly through the night

In a flap of feathers,

By Mason, Charlie and Lochie

Focus with a piercing gaze

By Hayden and Janae

Desperate and hungry to eat its prey

Moving silently through the night.

That one of them will die tonight.

The chase of life begins.

Sheer hunger drives the fox on.

The fox trotts happily through the night,

Looking towards the bright moon

Lighting up the evening sky

As the Fox reaches its den,

Teeth sink into the juicy rabbit,

You can run, but you can’t hide.

Dates for the following weeks

SJV Tuckshop is open Wednesday & Friday.  Orders can be made online via Qkr!  A copy of the Menu and Qkr! instructions can be found on the Tuckshop Webpage.

PLEASE NOTE THE CANTEEN IS NOT ABLE TO SELL AT RECESS OR LUNCH FROM THE COUNTER.

SALES THAT NORMALLY WOULD BE PURCHASED FROM THE COUNTER CAN BE PURCHASED VIA QKR AND WILL BE DELIVERED TO THE CHILDREN VIA THE LUNCH TUB.

PLEASE PROVIDE YOUR SONS AND DAUGHTERS WITH CUT FRUIT AS THIS ALSO IS NOT AVAILABLE FROM THE CANTEEN.

Please remember to bring your WWVP card with you.

The tuckshop is in desperate need of some volunteers.

If you can only spare a couple of hours, that would be fantastic.  If you have little ones, they are very welcome to come along.

Please contact the front office or fill in the tuckshop volunteer form to let us know you are able to help and when. 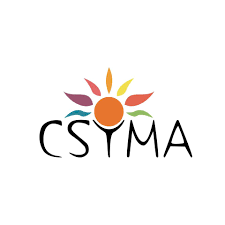 For this week’s Sunday resource, please access this our parish bulletin available at our link under the children’s section - Praying With Children: https://stjjvwestoncreek.blogspot.com/p/bulletins.html This worksheet reflects upon this Sunday’s Gospel reading (Mark 13: 24-32) where we hear about Jesus’ return to Earth. We are encouraged to reflect upon the nature of our lives here on Earth and how prevalent the occurrence of change is. We can take courage in the way that Christ’s words ‘will not pass away’, but rather, remain steadfast for the rest of time itself.

With further easing of restrictions, our churches are available to accommodate a higher number of parishioners! Please feel encouraged in returning to the mass in person with your families. The parish will also be continuing to stream Sunday morning masses on YouTube at 9am as per usual. To access the mass for the Thirty-Third Sunday in Ordinary time (Year B) online, please access this link: https://www.youtube.com/user/stjjv .

The parish Christmas party is being held this year at st John Vianney's on the 3rd of December! Please keep an eye out on this week’s parish bulletin for registration and further details of how the afternoon will run. We hope to see you there! 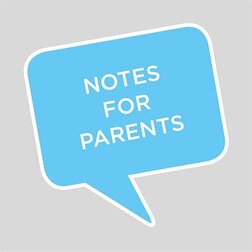 A new page for the newsletter - A place where the school will add notes that have gone home in school bags.  We know that sometimes bags are very hungry and eat school notes!!!
These notes will remain in the newsletter section for 2021, affording you an electronic version to look at.
Term 2 Week 2 Notes

No notes sent home this week.

No notes went home this week

Daily Check In Rules Etiquette Please print out this daily check list and have it by your child's work station.

No notes sent home this week

School Photo envelopes sent home with children. Yr 3, Yr 4 and Yr 5 will receive their school photo envelope when they return to school next Monday.

No notes sent home this week 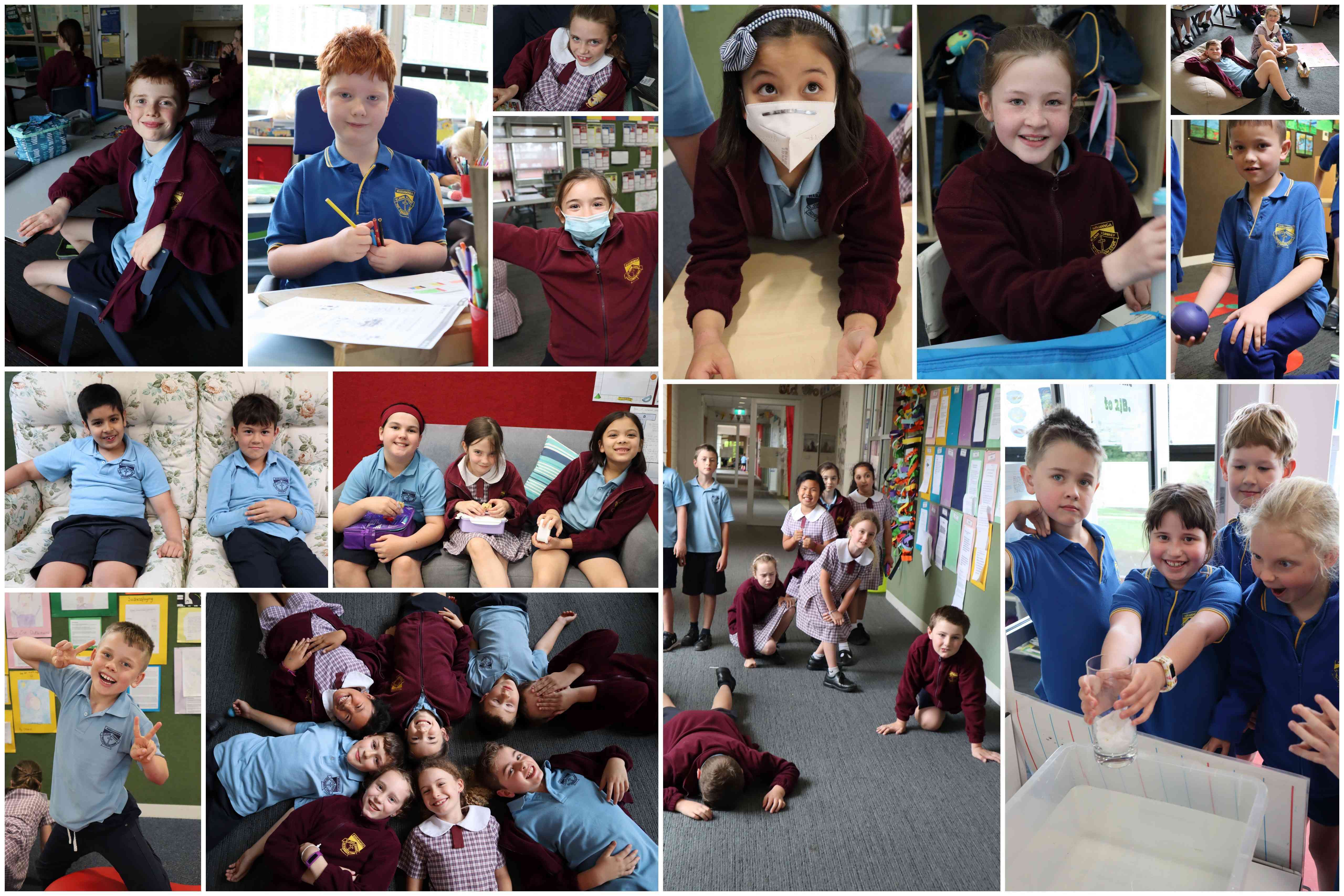 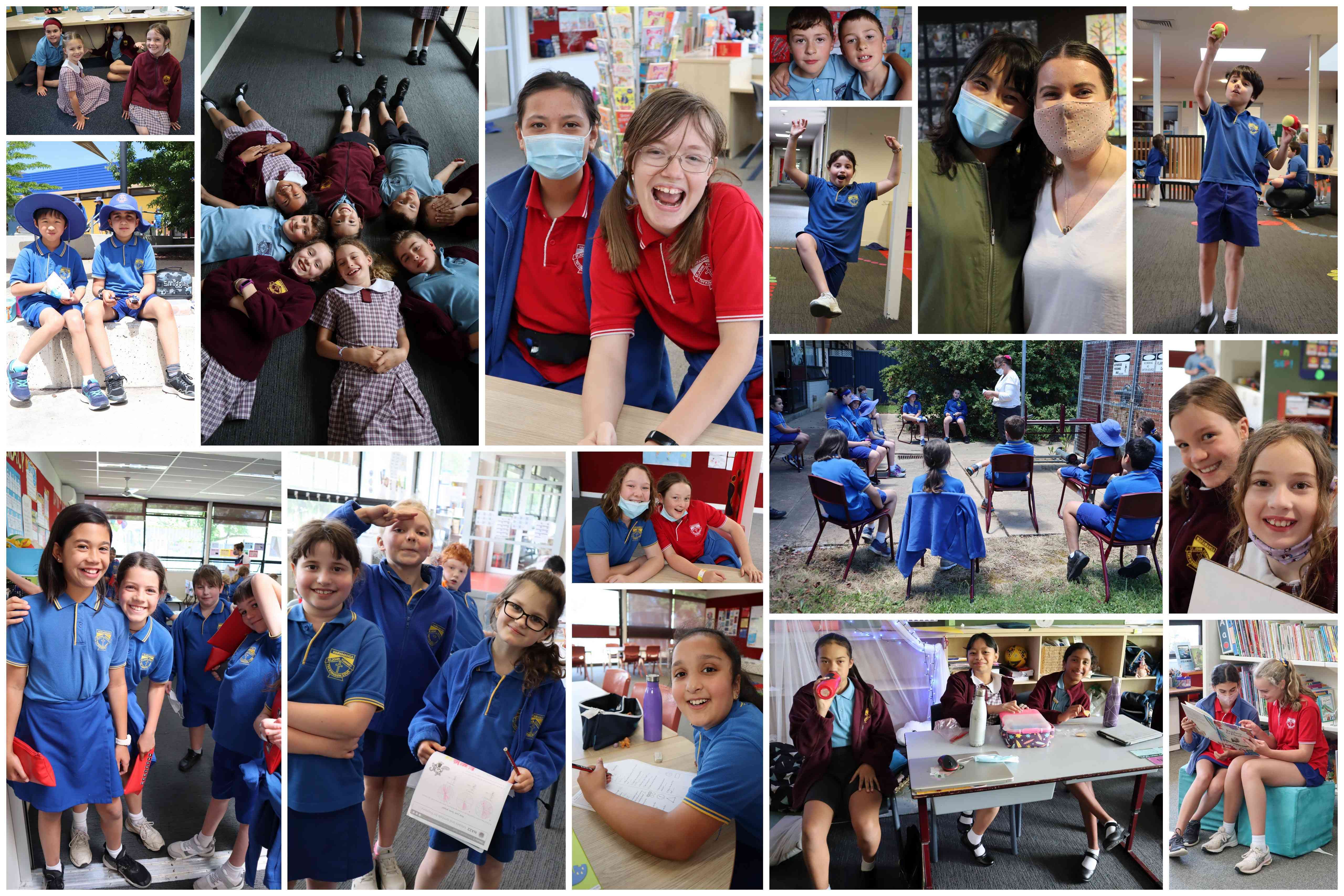 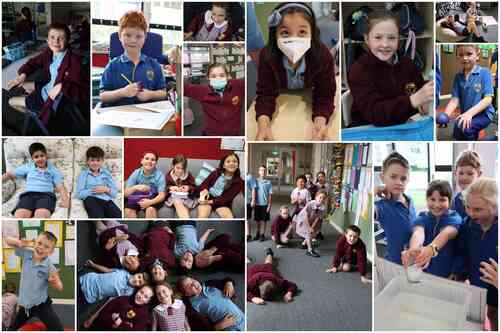 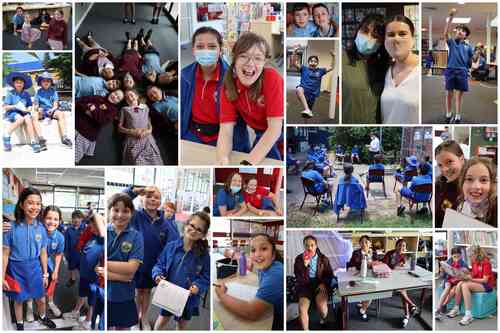 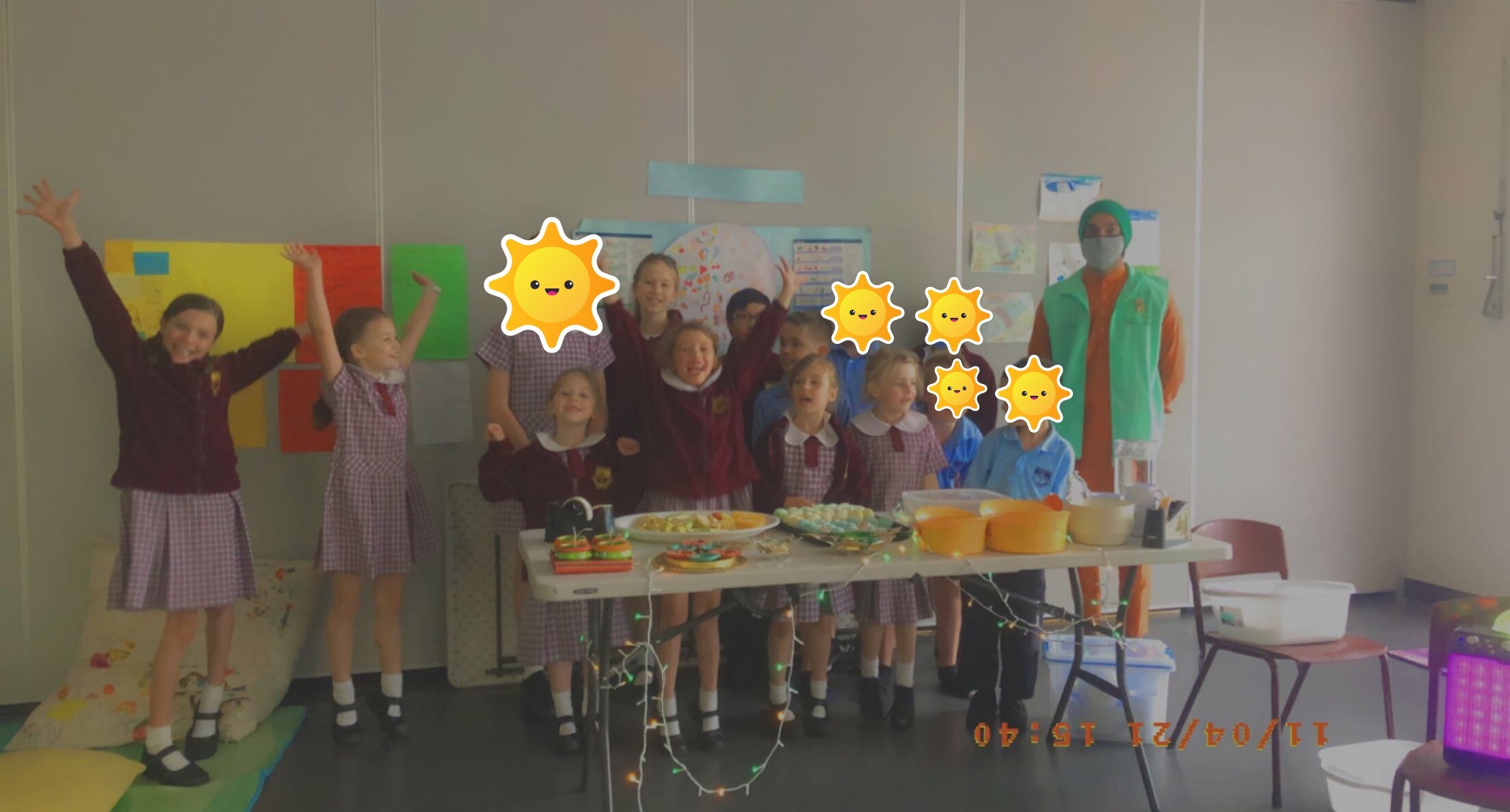 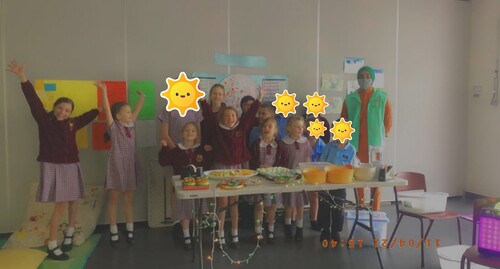 St John Vianney’s Kindergarten 2022 orientation is on next Wednesday 17 November. You will receive correspondence from the school with more information.

Unfortunately, this year due to COVID restrictions, we are unable to have an orientation session for preschool children attending in 2022. We will be sending out an information pack to enrolled families.

Holiday Care bookings will be taken from Monday 22nd November. Please note that bookings for Holiday Care will not be accepted if fees are in arrears.

ELC fees for Week 7 and 8 are due tomorrow.  As we are approaching the end of term, prompt payment would be appreciated.

Fifth Lane Photography are offering Christmas portrait sessions. Shopping centre Santa photos won’t quite be the same this year so this is a wonderful alternative. 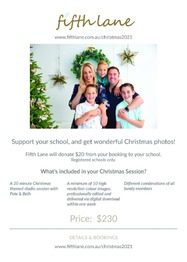